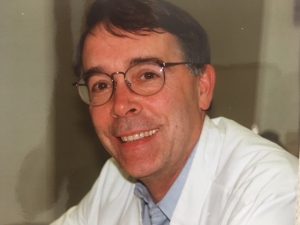 On July 17, 2019, Joerg Ritter, MD, PhD, Emeritus Professor of Pediatrics and former Attending Physician at the Department of Pediatric Hematology and Oncology of the University Children’s Hospital in Münster, Germany, has passed away at the age of 74 years after a short illness.

Prof. Ritter earned his medical degree in 1970 from the University of Freiburg. Following research fellowships at the Max-Planck-Institute for Immunobiology in Freiburg and the Laboratory for Immunopathology at the University Hospital Hamburg and completion of residency training at the Children’s Hospital Braunschweig, he joined the Department of Pediatric Hematology and Oncology of the University Children’s Hospital in Münster in 1978. He completed his PhD thesis in 1982 and became Attending Physician in the same year. He became Associate Professor in 1984 and tenured Full Professor in 1990, a position that he held until his retirement in 2010.

Prof. Ritter’s main clinical and research interest was focused on pediatric leukemia, in particular acute myeloid leukemia (AML). He became one of the founders of the pediatric AML BFM study group, which, in a series of systematic investigator-initiated studies, translated progress in medicine to improved patient survival from 30% in the 1980s to more than 70% in the early 2010s. His scientific achievements are reflected in more than 200 scientific publications and uncountable lectures and contributions on national and international meetings, active membership in several medical societies and receipt of several awards, including the prestigious Kind-Philipp-Award for Research in Leukemia that he received together with Professor Schellong und Professor Ursula Creutzig for the implementation of the AML BFM study group.

Early during his career, Prof. Ritter realized the pivotal importance of controlling infectious complications for the outcome of leukemia treatment and, as one of first pediatricians, focused his clinical attention on the prevention of infections and the diagnosis and treatment of invasive fungal infections. Apart from several epidemiological research studies and scholarly review articles, he made major contributions to the co-ordination and publication of the first national and international guidelines in this area, and these contributions founded his national and international recognition in infectious disease supportive cancer care: Prof. Ritter was co-founder and longstanding leader of the Infectious Disease Working Group of the German Society for Pediatric Oncology and Hematology (GPOH), longstanding head of the Section for Antifungal Chemotherapy of the German Paul-Ehrlich-Society for Chemotherapy (PEG), longstanding active member of the German-speaking Mycological Society (DMYKG), and an active contributor to the Infectious Disease Group of the European Organisation for Research and Treatment of Cancer (EORTC).

In early 2010, Prof. Ritter was bid farewell by his institution with an internationally casted scientific symposium that was attended by many of his closest scholars, colleagues, and friends. He was nominated Senior Professor of the Faculty of Medicine later that year and served as Appointed Member of the Ethics Committee of the Chamber of Physicians of Westfalen-Lippe and the Westfalian Wilhelms-University until this summer.

Prof. Joerg Ritter will remain a part of the community of all those working in infectious disease supportive cancer care and Medical Mycology, and he will be remembered not only for his achievements, but also for his efforts to improve the lives of seriously ill children  and his friendly and amiable personality.

Prof. Ritter is survived by his wife Ae Ri, sons Ulrich and Ken, one grandchild, and two brothers.